Our number one design principle is to never have data loss.

All accounts of data loss will be documented publicly on our GitHub Discussions.

Our last (and only) account of data loss was in February 2021 on our local-only version of Athens, before we made a public release, posted by a developer contributor.

When the self-hosted backend was in alpha, we had known issues of data loss, crashing, and freezing because the distributed events system being incomplete. We discovered and solved these issues internally as a team. We did not invite others to use this build during this period.

Now we are in beta, meaning we are ready to open up Athens for beta testers. We don't have known issues with data loss, crashing, and freezing anymore, and the first implementation of the distributed events system is complete. That said, we need to open this up to beta at this point because we need more real-world testing in a variety of contexts beyond our own team of six to go from beta to stable.

We invite feedback on anything and everything, don't be shy! We've created two new Discord channels, 2.0.0-beta and data loss at 2.0.0-beta-feedback and #data-loss, respectively. Join us on Discord!

To connect to an Athens server, you must know its remote address (an IP address, URL, or localhost) and its password. Skip to server to setup a server first if you haven't yet. 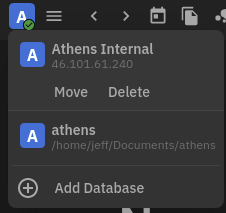 Go the Join tab and add the database name (give whatever name you want, it is only stored on the client), the remote address (which you can get from the server administrator), and the password (leave empty if no password). Then press the Join button. 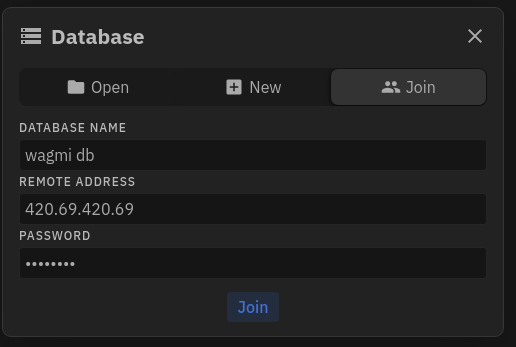 If the address and password match, congrats! You should be in a collaborative, self-hosted Athens! Read more

You can run Athens in your local environment, Docker, or DigitalOcean. Setup docs do not yet exist for AWS or GCP, but feel free to contribute and add these!

The default configuration can be found in config.edn. You can customize it through the config_edn environment variable.

Here's an example on how to configure the server password using config_edn.

The config_edn will be merged to other configs via deep merging.

The first command starts the Fluree database using docker to persist data. If you set :in-memory? false in dev/clj/config.edn no data is persisted and this command is not needed.

The second command will start HTTP server on port 3010, unless you've modified dev/clj/config.edn.

This requires 3 or 4 terminals.

By default, Fluree ledger stores data in ./athens-data/fluree. Clean out this folder.

You can create an Athens server without installing anything else via docker compose.

At any point, if any of the services fails to launch or something seems broken, you have two options to debug.

If you are running on Linux, you have to follow the instructions at Docker Permissions to give the linux user sufficient permissions.

If you want to configure a password, you can override the app configuration via an environment variable:

or via an .env file located in the same directory as the downloaded docker-compose.yml:

Setting up Athens on AWS is fairly straightforward.

Go to the EC2 Dashboard. 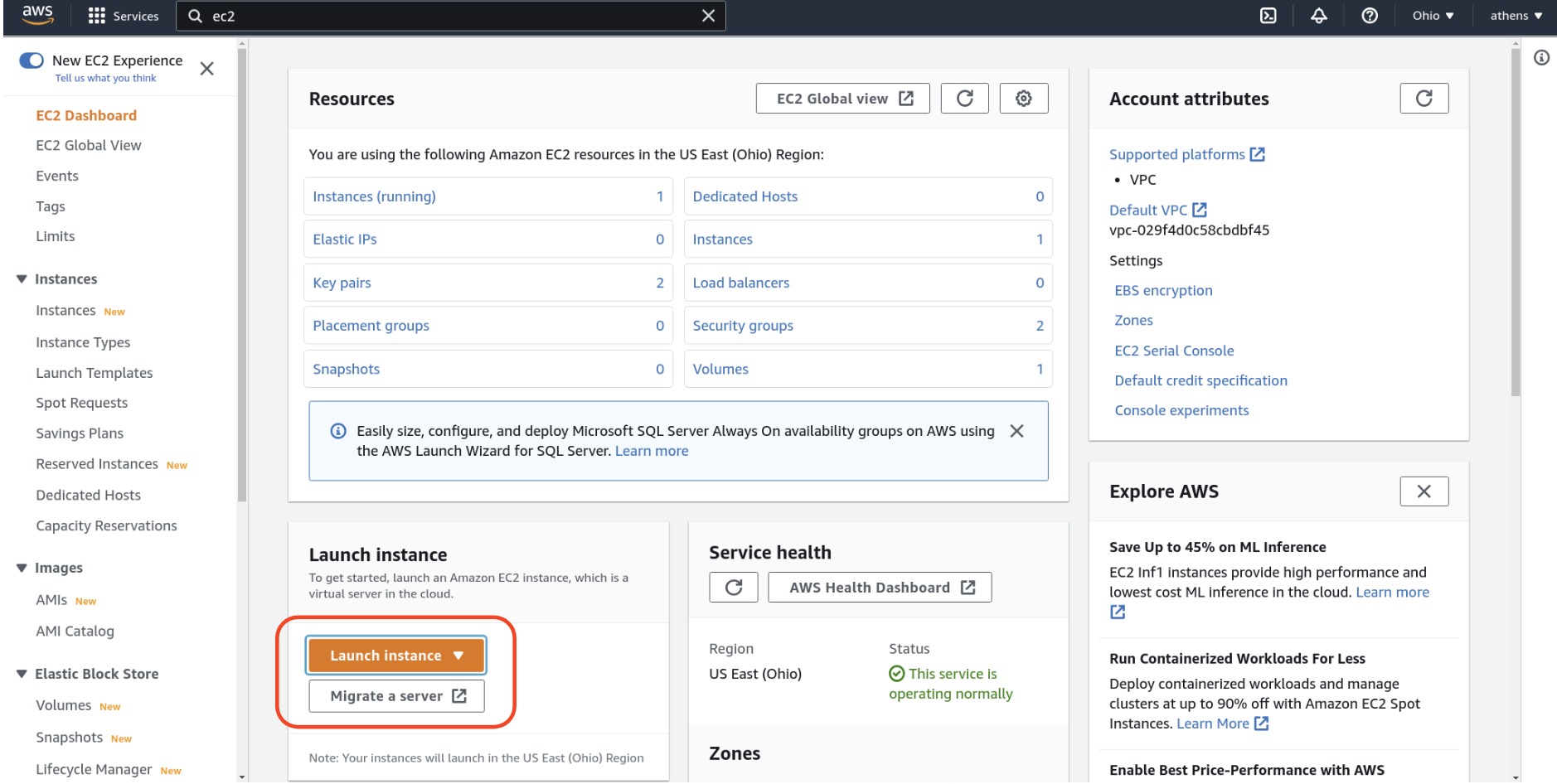 Choose the first Amazon Machine Image (AMI). At the time of writing, this is: 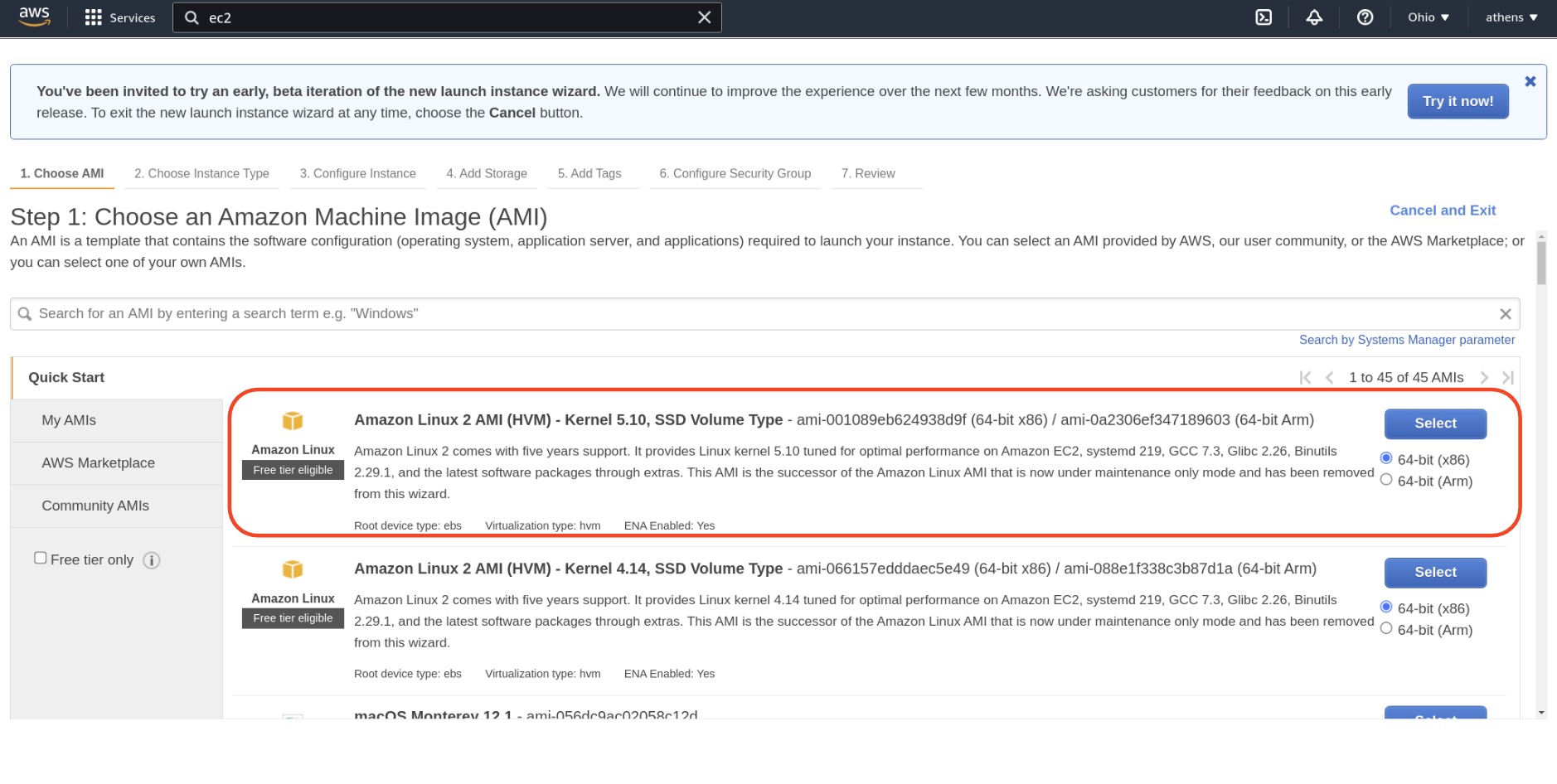 Choose an instance type. Athens requires at least 4GBs of memory, a t2.medium. 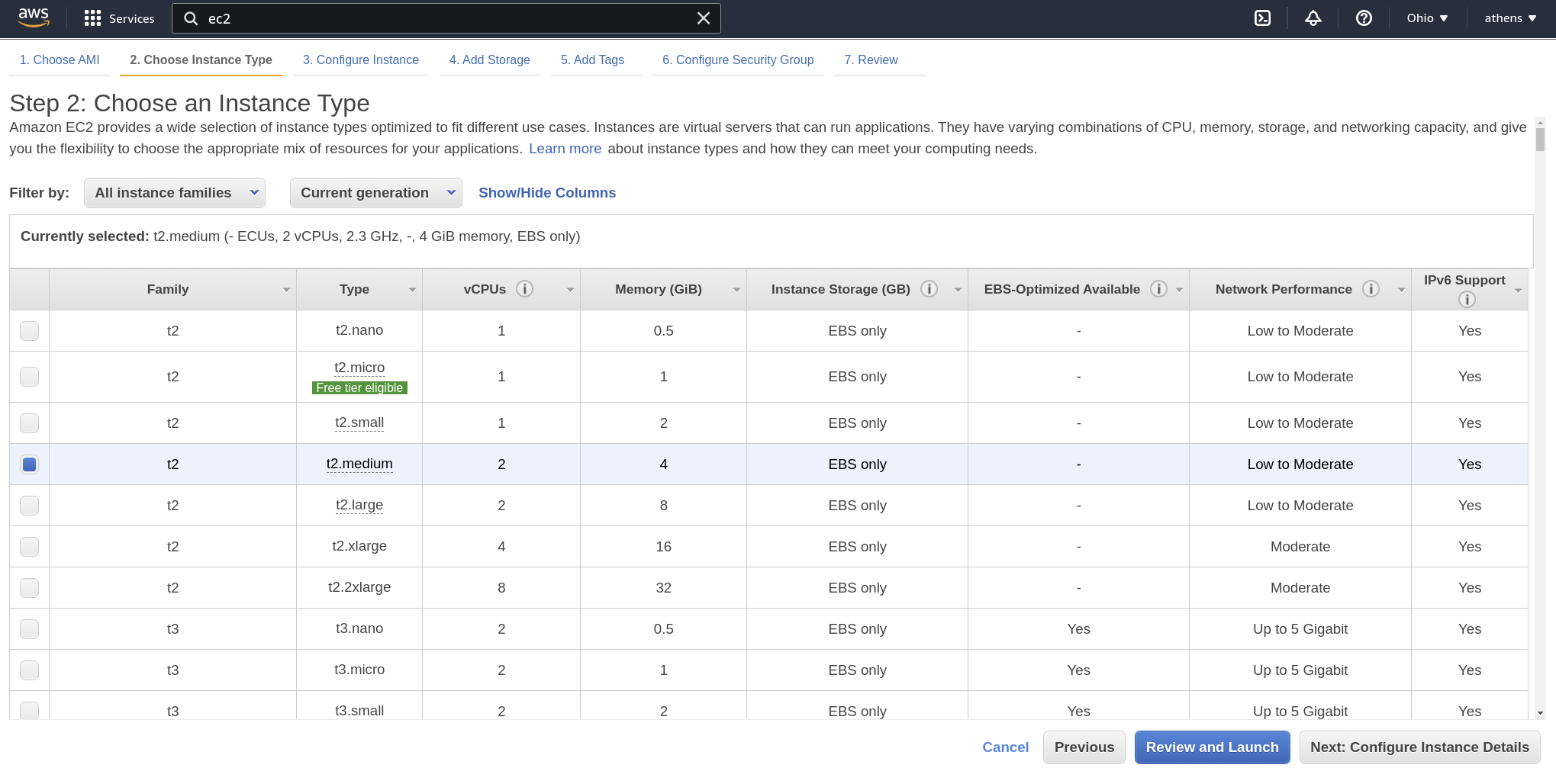 Press Launch. AWS will ask you to either create a key pair or choose an existing key to let you SSH to the EC2 instance. Choose an option and launch.

After a minute or so, your instance should be Running.

Go to the instance, press Actions, and select Connect.

You can connect using EC2 Instance Connect from the AWS UI or SSH client via your terminal.

Once you connect to your EC2 instance, you need to install docker and update permissions for Linux user ec2-user.

Install docker-compose and give it executable permissions. You can find releases at https://github.com/docker/compose/releases. At the time of this writing, the latest release is 2.2.3, and the AMI image has an x86_64 architecture.

More docker-compose docs can be found on their docs.

Download the Athens docker-compose file. At the time of this writing, the latest version is v2.0.0-beta.13. You can find all releases here.

Create the folder where your data will be stored.

Athens should be running. Otherwise, follow the instructions at our Docker docs for additional help and context.

From the AWS console, copy your IP address. Make sure there isn't a leading http:// or ending /.

An example URL would be:

Paste the URL to your Athens Client. 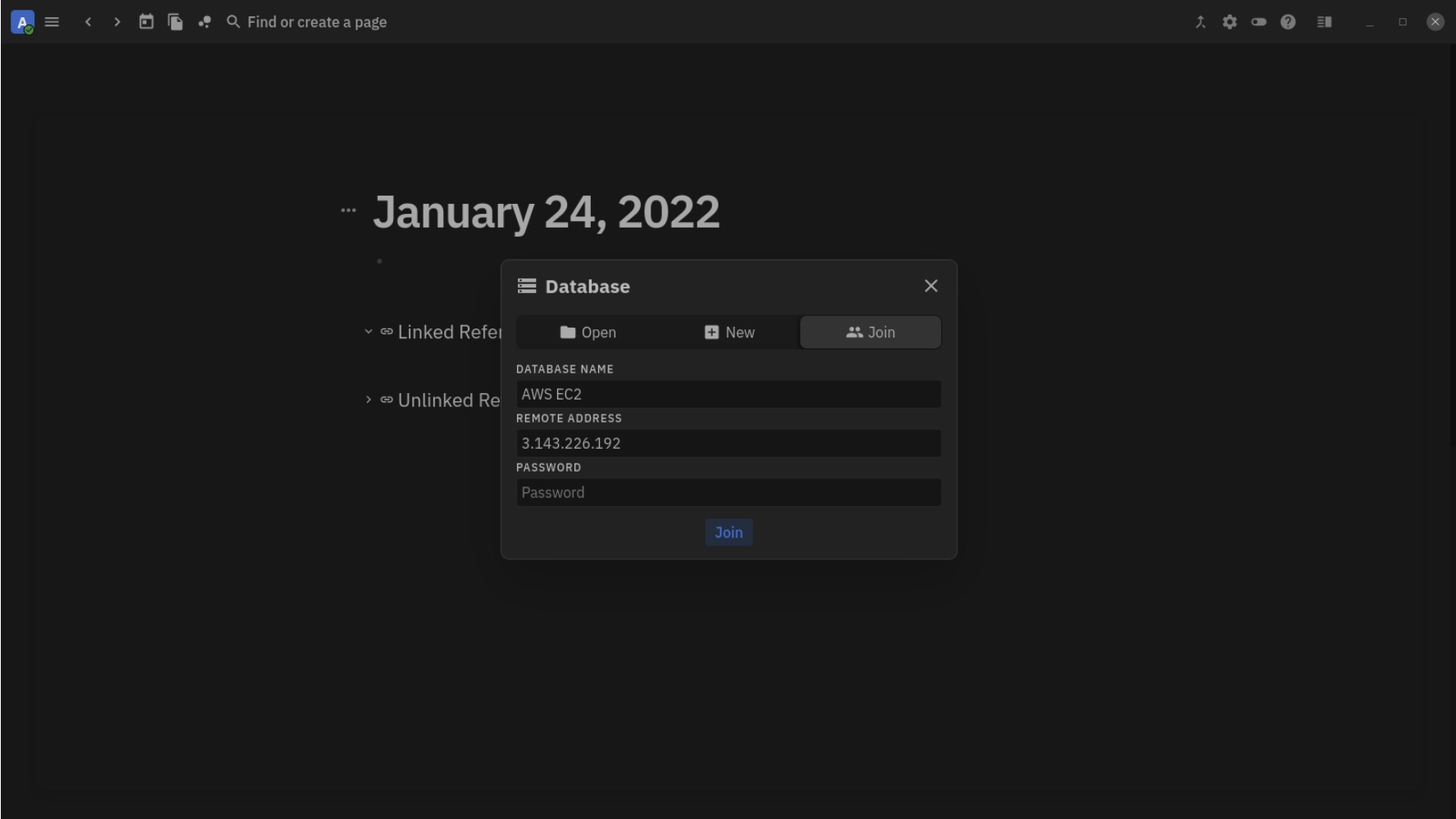 You should be connected to your Athens EC2 instance!

Athens the team has tested the backend beta server on DigitalOcean the most, and not as much yet on other cloud providers like AWS or GCP.

A minimum of 4gb of memory is needed.

Use marketplace docker image: docker 19.03.12 on Ubuntu 20.04 which has docker and docker-compose pre-installed.

If you resize your droplet image and have trouble opening the console, just wait a few minutes and refresh the Digital Ocean dashboard.

Once your droplet has been created, open the console to ssh to the server, follow the instructions in Docker to start the server, and copy and paste the IP address to your Athens client to connect to the server (and add a password if you configured one).

The backup method is currently an MVP. Please feel free to reach out on Discord or through info@athensresearch.org for help, feedback, and questions.

We call "Backups" "Save-Load" because our backups have 2 parts: saving/backing up and loading/restoring.

To backup your server, you need to have:

Save (Backup) Your Server​

To backup your Athens server you need to the following steps:

Clone Athens on your local computer.

Go to the Athens folder.

ssh into the remote server

Check to see if athens-cli.jar and save-cronjob.sh files are present on the remote server

Set up an hourly cronjob for the Save (Backup). This involves using crontab, a terminal user interface, to save your Fluree ledger, the source of truth (essentially the database) in self-hosted Athens.

Backups are stored to the /var/lib/athens/backups/ folder.

To change the frequency of the backups, change the cronjob parameters accordingly, following the cronjob documentation shown after running crontab -e.

After at least an hour, check that backups are happening:

ssh into the remote server.

Find the file that you want to restore from.

Load the file to Athens server, replacing "$FILENAME with the correct filename.

Restart the Athens server docker-compose start athens If you are not able to load (Restore) the file please go through the steps again and if the problem still exists then let us know in our Discord server.

Copy Your Backup to Your Local Machine​

ssh into the remote server

Find the name of file you want to get.

There is an unofficial, third-party created Helm Charts deployment, but we have not tested it ourselves.

Here is a list of issues the Athens Core Team has encountered while self-hosting our own server since around November 2021.

Running out of system resources​

Cannot connect to Athens via https​